Words, Actions: On Translation and Activism

By Evelina FerrarNovember 22, 2019No Comments

Central European Seminar Series
6:00 pm to 8:00 pm, Tuesday, 26 November 2019
Embassy of the Republic of Slovenia in London, 17 Dartmouth Street, London SW1H 9BL
All are welcome, registration is free but essential via Eventbrite.

As part of the UCL SSEES Central European Seminar Series and the World Festival of Slovene Science and Art organised on the occasion of the 100th Anniversary of the University of Ljubljana writer, translator and lesbian activist Suzana Tratnik will be speaking to translator Olivia Hellewell about her life of words and actions. 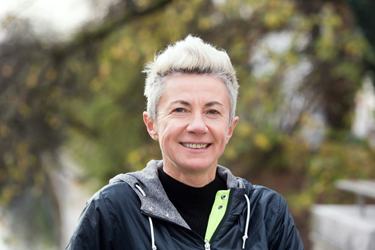 Suzana Tratnik lives and works in Ljubljana as a writer, translator and essayist. Her books and short stories have been translated into more than twenty languages, while she herself has translated an impressive array of fiction and non-fiction into Slovene, including authors such as Judith Butler, Eileen Myles, Kate Bornstein, Ian McEwan and Truman Capote. As a co-founder of the pioneering lesbian group, Škuc-Lezbična sekcija LL, and an organiser of Ljubljana’s LGBT Film Festival, Tratnik is as proactive in society as she is productive on paper; a synergy that she documented in her memoir Lezbični aktivizem po korakih (Lesbian Activism Step-by-Step; 2013). In 2016, a selection of Suzana’s stories became available to an English-speaking audience: Games with Greta and Other Stories (translated by Michael Biggins et al.) was published by Dalkey Archive Press. Discussion will turn to prominent themes in this work – marginal destinies in contemporary urban life, childhood in 60s and 70s Yugoslavia, and of course, her own experience of being translated.
The event is hosted by the Embassy of Slovenia in London and made possible by the generous support of the Centre for Slovene as a Second and Foreign Language at the University of Ljubljana and the Slovene Ministry of Culture. Slovene wine will be served, courtesy of the Embassy of Slovenia in London.