By Evelina FerrarMarch 14, 2019No Comments 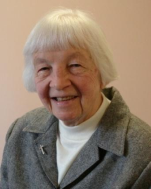 Born into a devout Ljubljana Catholic family in 1928 as one of four girls with nine brothers, Sister Terezija (Rezka) Žužek led a remarkable life as a mission doctor around the world. She died in Marian House, Uxbridge, on 26 January 2019 at the age of 91.

The Žužek family fled Slovenia in 1945 after the Communists took over what was then Yugoslavia. After several years in an Italian refugee camp, Rezka and her sister Agnesa went to Spain, where she graduated with a medical degree from the University of Zaragoza.

Rezka and Agnesa both decided on careers as mission doctors in a Catholic religious congregation. They joined the Medical Mission Sisters in South Shields, England, and took their first vows there in 1958. Sister Rezka subsequently served for many years as a mission doctor in Pakistan, South Vietnam, Yemen and Peru.

On her return to the U.K. in 1994, she became a prison visitor to Holloway Women’s prison in London. It then contained many women from Eastern Europe and South America who had been bribed by drug dealers to carry drugs. Rezka’s language skills were invaluable, as was her gentle, kind approach. She helped the women to keep contact with their families, and gave them encouragement and support.

In 2011 Rezka came to live in the Marian House care home. Sister Gillian Horsfield, a fellow-member of the Medical Mission Sisters, writes: ͏͏“Rezka had had a difficult life… The trauma of the war and being a refugee had left her with an underlying sense of insecurity, but living in Marian House, with its rhythm of life and pastoral care, brought her peace… Every time one of the care staff came into her room she gave them a huge smile. And all of us when we visited were struck by Rezka’s peacefulness … It was in that peaceful state that Rezka went to God on 26th January. We remember her with gratitude and love.”

Her two surviving brothers, Stane from Argentina and Andrej from USA, attended her funeral. Rezka was a longstanding member of the British-Slovene Society.