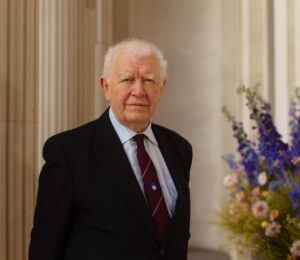 Keith Miles, first Chairman of the British-Slovene Society, has been awarded the Order of Merit of the Republic of Slovenia by President Boris Pahor.

Keith was the first official representative in the U.K. of independent Slovenia in 1991.

The ceremony took place on 31 March 2022 at Gornji Suhor in Bela Krajina in Slovenia on the annual Slovenian-British Friendship Day. Near this village, a Royal Air Force bomber was shot down in 1945. Local inhabitants helped rescue surviving crew members, and those killed were buried nearby.

Keith was due to take part in the ceremony, but at the last moment was prevented by Covid. In an address read out for him at the ceremony, Keith said: “Perhaps the most important thing about friendship is that it is a giving relationship, not a demanding relationship. Friends try to understand one another better and it is a bond of mutual affection.”