The hayrack in Henley’s Gillots Field donated by the British-Slovene Society was constructed by specialised Slovenian craftsmen living in Trebnje in the Dolenjska region of Slovenia. They built a reduced copy of a famous hayrack located nearby belonging to the Lah family. The Henley hayrack measures 8.4 m in length and 3.5 m in height, and consists of two sections.

A Slovenian hayrack is a structure for drying crops standing independently or leaning against an outbuilding. Most frequently made of wood, a hayrack is situated close to the farmstead or further away on a field or meadow. Grains, hay, corn, flax, hemp, legumes, cuttings of tuberous plants and ferns were dried and stored in it. Double hayracks were constructed to use also for storing tools, agricultural machinery and carts, as well as building materials and modern vehicles.

Hayracks were built around farms and on the estates of castles and monasteries. They demonstrate an extraordinary sense for using natural materials and a mastery of carpentry. These hayracks (kozolci) are located on lands settled by Slovenes, and are not found anywhere else in the world. That is why the hayracks have become one of the most recognisable features of Slovenia. The Land of Hayracks museum reminds us of their cultural value and promotes their preservation.

Lah’s kozolec (hayrack), in Migolica near Mirna in central Slovenia dates from the time between the two World Wars. The Lah family built it with the help of a self-taught carpenter and fellow villagers. Jože Lah remembers when its roof was thatched, before the straw was replaced by fibre-cement roofing in the 1970s, and later by “trimoform” – roofing produced by the Trimo company from Trebnje.

Originally, the kozolec stood near the homestead. It was later moved a few hundred metres lower to the edge of the meadow below the orchard to save space. The new location was better as the windiness of the open valley dried the feed and grain well. However, the remoteness also meant that Lah’s kozolec attracted birds and wildlife. The farm’s chickens would come and peck the feed off the lower cross members, forcing the family to hang the produce higher up.

Lah’s kozolec is a single stretched kozolec with five sections, known as “windows”. It is the tallest kozolec in the area. It is truly enormous, measuring 29.35 m in length, 1.65 m in width, and 5.25 m in height.

This particular kozolec is unusual in that the pillars are not made from a single piece of oak. Instead, the main pillar is supported by additional side pillars which go into the ground. When these rot, they can be replaced by new ones. Due to England’s damper climate, the Henley kozolec is based on concrete foundations, and therefore the side pillars stop at the level of the concrete slab.

Although this kozolec is a reduced version of the original one in Slovenia, it has the same number of horizontal racks as the original one. However, for safety reasons, the thickness of the racks is not reduced.

Damjan Bajc, the craftsman who designed and constructed the Henley hayrack, followed the advice of experts of The Land of Hayracks. This is Slovenia’s first open-air museum of hayracks. It is located near Šentrupert in the Dolenjska region of Slovenia.

The open-air museum consists of all six existing types of typical Slovenian hayracks: three single and three double hayracks. The museum covers an area of 2.5 ha and comprises 1 km of paths suitable for walks. The oldest hayrack in the museum is called »Luka’s toplar« dating back to 1795.This is one of the world’s oldest preserved double hayracks. 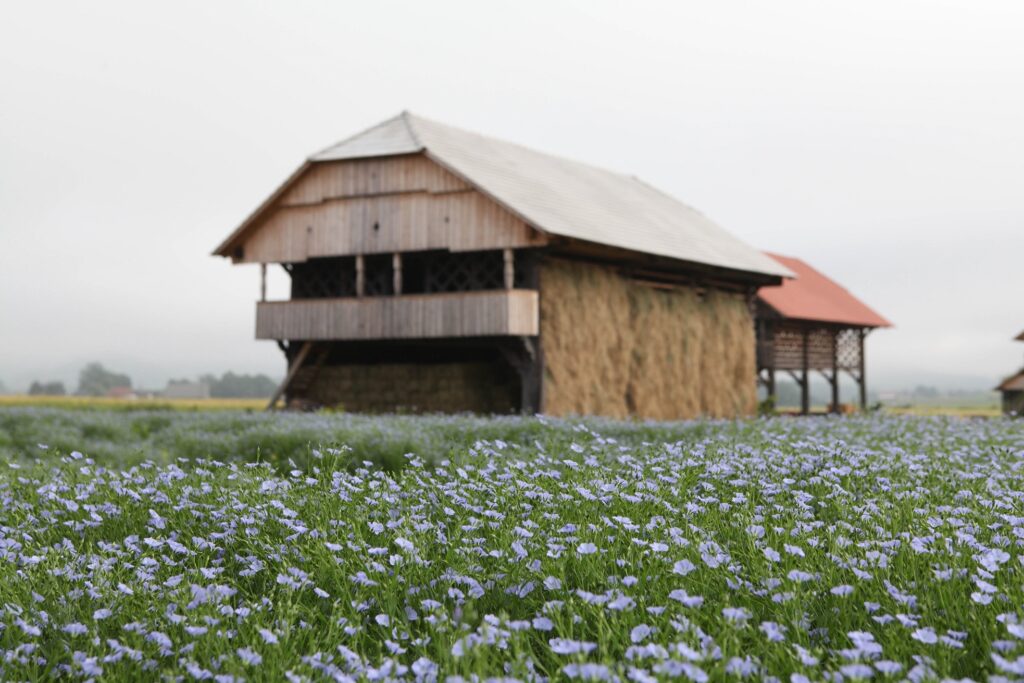 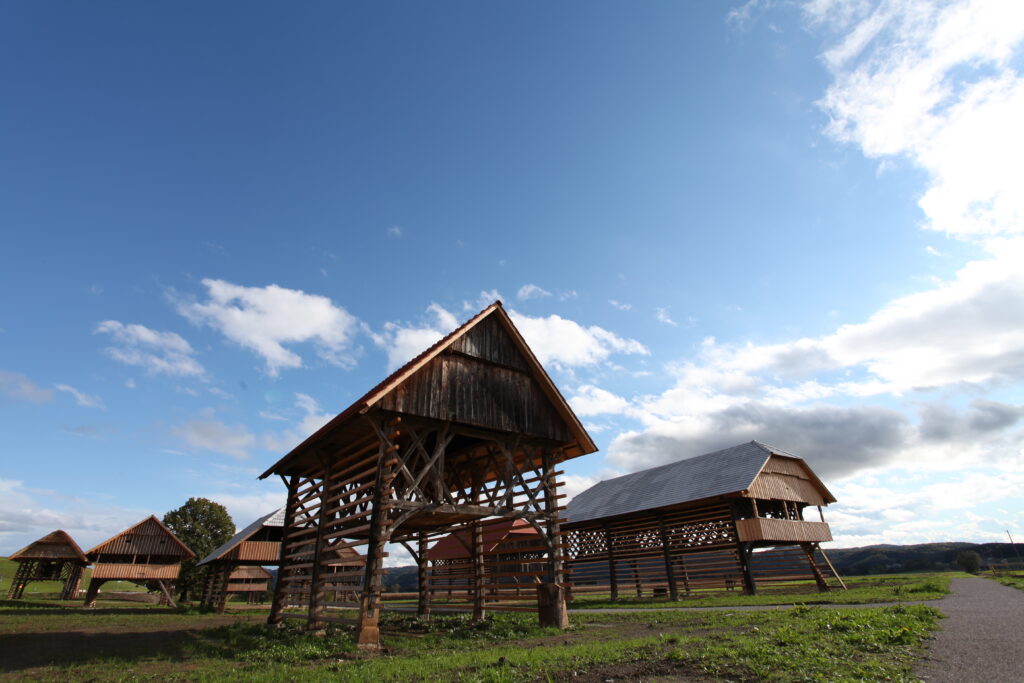 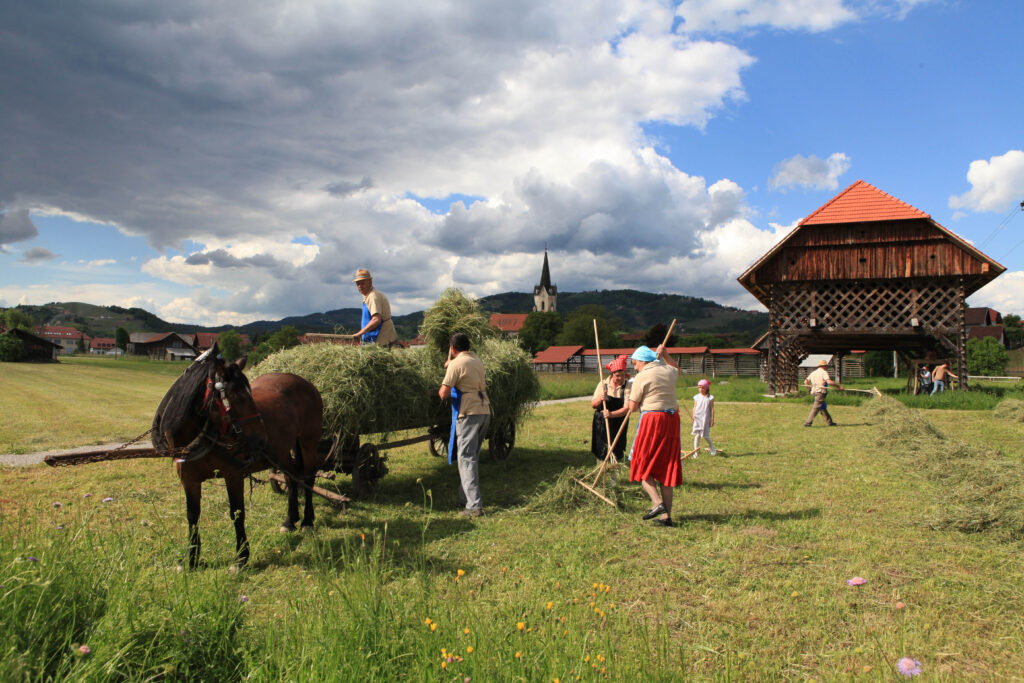 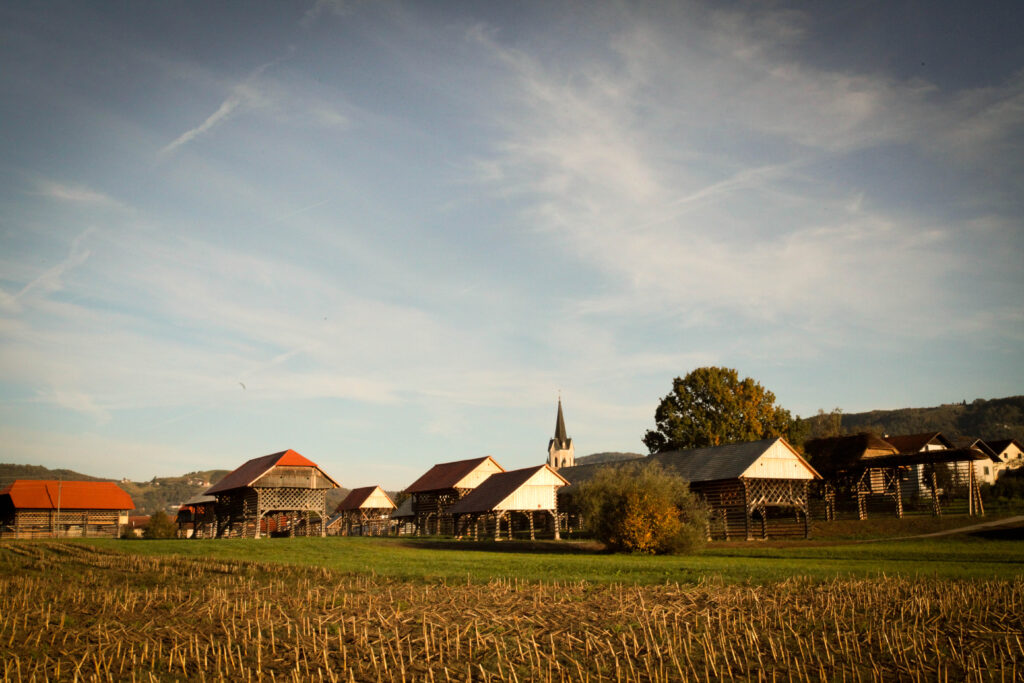 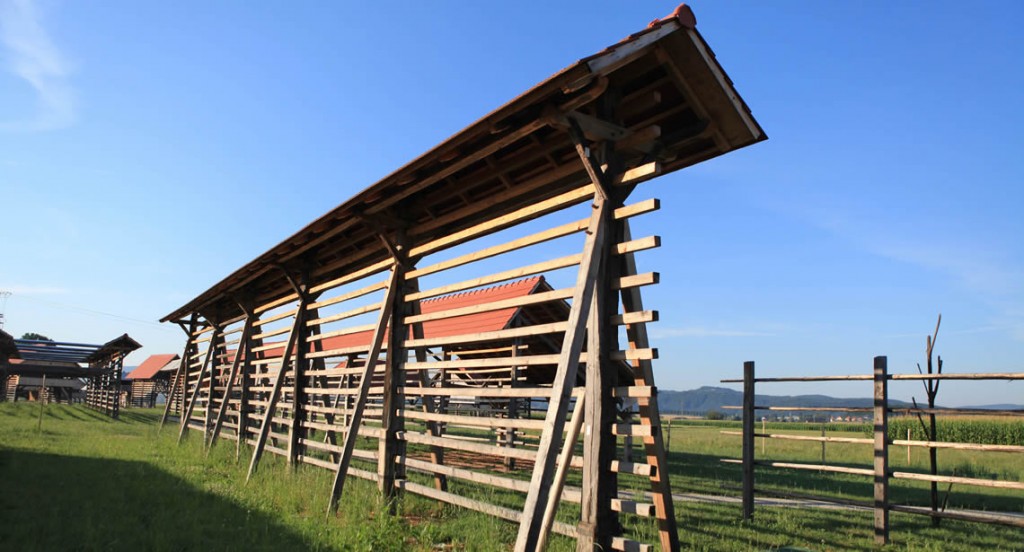